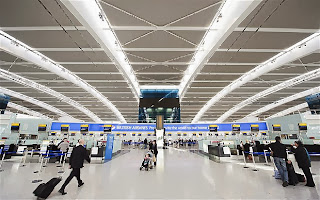 London Gatwick has revealed that Nando’s will open its first ever airport restaurant in South Terminal next summer.

The deal between Nando’s and Gatwick marks the start of a major overhaul of the airport’s food and beverage offering in South Terminal.

It follows a complete re-vamp of the North Terminal, which has seen eight new restaurants open in the past two years. New additions range from Jamie’s Italian and Comptoir Libanais to YO! Sushi and new coffee outlets including Starbucks and Pret a Manger.

Charlotte Christiansen, Business Development Manager for Catering at London Gatwick, said: “We are thrilled that Nando’s will be opening its first airport restaurant at Gatwick this summer. Nando’s is a hugely popular brand with our passengers and its extensive menu is perfectly matched to airport dining as it is quick, fresh and delicious. More than a third of our passengers told us they would like to see a Nando’s at Gatwick so we have acted on this.”

Passenger ratings of food and beverage at Gatwick have improved significantly in recent years, with 85% of passengers now scoring the selection of outlets available as either excellent or good². The number of passengers eating, drinking or buying products from catering outlets in the departure lounge has also steadily increased, with nearly 65% of passengers making a purchase – up by nearly a quarter³.

Set to provide London Gatwick’s passengers with a menu bursting with flavour, variety and great value, the team behind the new restaurant will spend the next seven months on site constructing the 5,900 sq ft restaurant, which will feature Nando’s unique design throughout, including its eye-catching range of African art.

“It’s a complete new territory for the brand, but demonstrates our forward thinking and desire to offer our fans and customers the best possible Nando’s experience whether they’re on a high street or in an airport terminal. We can’t wait to open our doors!”

This development is in direct response to passenger feedback to see a Nando’s at Gatwick. Recent research saw the brand hit the top spot for restaurant chains passengers would like to visit at the airport – 33% asked for it – ensuring the airport experience truly reflects passengers’ needs.

Nando’s Gatwick will operate approximately 20 hours a day between the hours of 4.00am and 12.00am for passengers to enjoy meals for breakfast, lunch or dinner before they fly.
Posted by Unknown at 00:27 No comments: 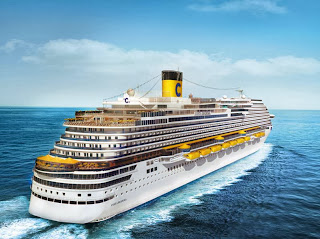 Costa Diadema, the future flagship of Costa Cruises, today touched water for the first time during the technical launch ceremony at the Fincantieri shipyard in Marghera.

Costa Diadema (132,500 gross tonnage and 1,862 guest cabins) will be delivered on 30 October 2014. Costa Cruises has invested a total of around €550 million in her construction and the project is employing approximately 1000 shipyard workers plus another 2500 employees of allied industries. The benefits in terms of employment extend beyond the yard, especially regarding the fitting-out of the interiors of the cruise ship, with the involvement of about 400 contracted suppliers, most of which are Italian firms.

Costa Crociere S.p.A. CEO Michael Thamm commented: “Costa Diadema will be our new flagship and our tangible commitment to the future success and growth of our Company. She is the 10th cruise ship built in Italy by Fincantieri for Costa since 2000, with a total investment worth almost €5 billion. This investment creates wealth and employment for the country as a whole – not only during the building, but also when the ships are in service. Costa Diadema’s winter itinerary will include three ports in Italy: Savona, Civitavecchia and La Spezia. At the same time, thanks to her innovative features, Costa Diadema will open up new horizons for Costa.”

Fincantieri’s CEO, Giuseppe Bono, commented: “For many years now we’ve been applying Italian know-how to form a winning team with Costa. We hope that the country as a whole is proud of these two major companies and will not fail to support their continued growth. We’re also convinced that Costa Diadema, the largest ship ever built for Costa Crociere, bodes very well for the future development of our companies and the entire industry”.

Costa Diadema’s technical launch ceremony was carried out according to seafaring tradition. The launch started with the welding of a coin at the base of what was once the mainmast, a custom considered to bring good luck. Shipyard director, Antonio Quintano, then invited the godmother, Ms. Franca Grasso, to cut the ribbon and break a bottle of champagne against the bow. Once the dry-dock basin where the ship took shape over the last few months had been filled with water, the hull finally touched the sea for the first time.

Highlighting the strong link between Costa and its guests, Franca Grasso is a member of the CostaClub (Costa Cruises’ loyalty club) coming from Giarre (Sicily), who was chosen through a selection on board Costa ships cruising in the Mediterranean Sea at the end of October and beginning of November 2013, involving over 12,000 guests.

Costa Diadema’s distinguishing features will be comfort combined with top quality food, wine and entertainment. The new flagship’s interiors will be even cosier, roomier and more modern in terms of facilities and layout of her public areas. Costa Diadema will offer large, split-level rooms directly overlooking the sea and conveniently interconnected, thus evoking the atmosphere of a buzzing seaside resort.

Among the many innovations on board are new food and wine tasting treats in the shape of the Vinoteca, Birreria (beer house), Japanese Teppanyaki, Pizzeria in Piazza Pizza and Gelateria.

There will also be new forms of fun and entertainment on board with the advent of the Country Rock Club, the place to go for classic rock music, and the Star Laser room featuring different styles of interactive laser games including the Laser Maze.

The Portobello Market Piazza, at the heart of a 1100m2 area consisting of designer stores and retail outlets, will appeal to shopaholics, while those who enjoy the sun, sea and spectacular ocean vistas will enjoy the open-air promenade and cabanas.

Meanwhile, the purpose-built Samsara Spa on three levels, located on the upper decks, will offer the rejuvenating experience of a wellness cruise.

In Winter 2014/15 Costa Diadema will be deployed on a one-week itinerary including the chance to visit two of Italy’s must-see cities – Rome and Florence – on one cruise. The port calls are Savona, Marseille, Barcelona, Palma de Mallorca, Civitavecchia and La Spezia.